Participation in a program such as Change the world, model of the United Nations, is a major challenge for students of 15 years.

On April 20, 21 and 22, five ESO students were in Barcelona accompanied by a teacher from the center, Roz Grimshaw, to participate in the Change of the World Program organized by the United Nations.

Our boys had been preparing in English classes, the topics they would discuss in Barcelona. Once there they met in the facilities of St. Peter’s School with other boys and girls of Secondary and Baccalaureate coming from places as different as Russia, USA, England or Italy, to deal with matters of international relevance, totally in English language.

Lucía Martín, Ana Hart, Martín Subirá, Lola Recaséns and Sara Palomar were the participants, who attended the event on a voluntary basis. Dressed formally and elegantly, the process began with the assignment of teams and names of countries that they should represent, in order that each speaker could put himself in the shoes of that country and its people.

They were discussing aspects such as the refugee crisis in the Mediterranean, the use of technologies by terrorists or nuclear weapons. Our children have valued this experience as something unique and have defined it themselves with phrases such as: “I did not expect it that interesting”, “you feel different after having participated because you deal with topics of global importance”.
We want to facilitate the link of the web so you can read more information about it

We are very pleased with the role they played in Barcelona and specially with the interest they showed in an initiative of this style, which brings them closer to a different reality, puts them in contact with other countries and cultures, and helps them to mature beyond the walls of our school.

Teachers and students together at the CDM La Granja

STARTING TO PROGRAM FROM CHILDREN WITH CODY ROBY 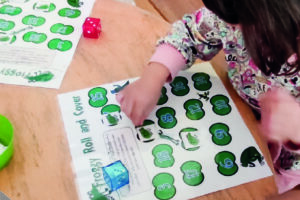 STARTING TO PROGRAM FROM CHILDREN WITH CODY ROBY

This website uses cookies to improve your experience while you navigate through the website. Out of these, the cookies that are categorized as necessary are stored on your browser as they are essential for the working of basic functionalities of the website. We also use third-party cookies that help us analyze and understand how you use this website. These cookies will be stored in your browser only with your consent. You also have the option to opt-out of these cookies. But opting out of some of these cookies may affect your browsing experience.
functional
Functional cookies help to perform certain functionalities like sharing the content of the website on social media platforms, collect feedbacks, and other third-party features.
SAVE & ACCEPT
Powered by